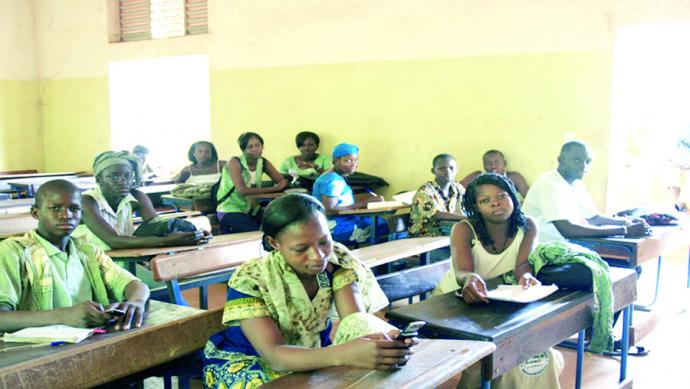 Lever 5: present the functions of school leaders in a competition.

This is exactly where our desire to “make the transition an opportunity for the school of Mali” makes complete sense. We recall that in order to protect the school from political actions, the Malian legislator conditioned access to several functions to a competition:

Article 60: “The positions of the head of the institution, the pedagogical advisor, the inspector and the director of the Educational Animation Center (CAP) are subject to a competitive examination.

The conditions for the organization of this competition are determined by order of the ministers in charge of education”. (Law 99 – 046, dated 28.12.1999, on the guiding law for education). In 2009, a union demand was used as a pretext to repeal this article, which did not allow the principals to make better use of the school. Indeed, the education sector is the most powerful bank of public service appointment positions in Mali. First, at the national level of the system, we can observe:

– the cabinets of the two ministers responsible for education,

– relevant services: the National Commission of Mali for UNESCO and ISESCO, the Planning and Statistics Unit of the Education Sector, the Support Unit for the Decentralization/Deconcentration of Education and the National Center for School Canteens);

At the middle level of the system and at the school level, National Education is full of numerous appointments: the structures of the middle level of the system (26 Learning Academies, 129 Centers for Pedagogical Animation and 8 Regional Pedagogical Inspectorates) and school management (from foundation 1, foundation II, general secondary, technical and vocational secondary, normal education) offers thousands of positions that tickle the fancy of many leaders (especially political party leaders) including all those who want to join the nomination network .

If we add to this bank of positions the many markets of the education sector and the opaque private sector (which I call my book the “educational exchange”), it is easy to understand that the education system is above all financial and. political action before it is a stake for the future of the nation. Without a disconnect between educational management and these political and partisan issues, our education system will exhibit the same disorder as traditional gold panning areas where everyone is looking for the same resource: money. This separation can only be achieved with an “institutional redefinition of the professions of school leaders” that must be freed from the clutches of those who use the school more than they serve our educational institution. It is necessary to recompose the professional functions and present them in the competition. Pending this institutional redefinition, it is absolutely necessary to respect the “Career Plan for teachers”. We will never have the school of our desires as long as the nation does not give meaning to work and seniority in employment. A colleague recently informed me that he had been in the civil service of the state since 1998; but that one of his former high school students who joined the local government service in 2009 (almost 11 years apart) has already passed him in grade and degree (same category, same degree).

There is indeed reason to wonder about the interest in the excessive privatization of our secondary education. It is clear that if you create a company, it is to make a profit, a benefit that the state provides to the promoters of private secondary schools. But in return, it remains to be proven the recognition of the public benefit that is the basis of the state’s gesture in favor of this private sector. Because, at the secondary level, the country currently has about two thousand private institutions (high schools and technical schools). If the private sector would recruit its own teaching staff, the rate of unemployed graduates would be reduced by at least 50% in the country and the public utility of private high schools would no longer be in doubt. But the private sector lives off the public, whose teachers provide all the lessons in most private institutions, even though the law obliges each promoter “to recruit qualified teaching staff in accordance with the legislation in force on employment in the private sector” (Article 5 of Decree 94-276/PRM of August 15, 1994, which defines the conditions of implementation of the law on the status of private education in the Republic of Mali). If the public service is limited to hosting only state students, the education system would benefit from the purchase of facilities with tens of billions of subsidies provided annually to private schools. We recall that, during a televised debate on the confusion surrounding the orientations of those admitted to DEF, this solution was proposed by Mrs. Bintau MAÏGA, when she was Director of the Planning and Statistics Unit (CPS). “With 500 million we can build a secondary school with twelve (12) classes, a management block, toilets…”, she argued. But among the promoters of private schools, there are MPs (old and new), regional councillors, local councilors (district and municipal councils), former ministers, bankers, multinational school networks and complexes, operators of all kinds. Personal issues come before the common future and, again, money is the bane of the school.

An effective way to establish order in the private sector today is to transform all private secondary institutions into mixed institutions: the state, for example, recruits 70% of the teachers in each private school and deducts the amount of salaries from state grants for students. attending these schools. This is also what happens between the State and Catholic Education where state subsidies go to pay teachers’ salaries and these schools can also hire state teachers.

It is absolutely necessary to withdraw from the Ministry of Territorial Administration and Decentralization (the service of employers of civil servant teachers of communities) the possibility of carrying out transfers of teachers from communities even without the opinion of the Ministry of National Education (user of the service,) Exactly about this administrative absurdity has built a real mafia network that is emptying our schools from the villages and districts for the benefit of Bamako and other big cities. Secondary level teachers mainly go to Bamako and regional capitals for lessons in private institutions (“hunting”) and home lessons (“fishing”). Because, the movements are not only in the direction of Bamako: the teachers of the rural municipalities covet the leaders of the district and region; the secondary schools of the districts are pierced by those of the main cities of the region where there are a large number of private institutions. In large urban centers, there may be more than 20 teachers in a first base of six (6) classes. At the same time, just 15 km away, a school principal has only one teacher available to deliver (2) the same lessons to six (6) classes. In the PPB of Toukoto (EA of Kita), for example, Kourouninkoto’s “Cycle 2 C” which was operating with only three (3) teachers, has just been stripped of two (2) national transfer teachers. How can a second cycle work with one (1) teacher? The most disturbing thing is that this is not a situation specific to this locality: there are dozens of humiliating situations of insufficient teachers.

In a recent “Open Letter” addressed to the head of state, His Excellency, Colonel Assimi GOÏTA, I highlighted the restrictions imposed on about twenty secondary schools which have left more than 50 teachers, with national transfer, without any respect for the hierarchy (the majority is often the only teacher of a discipline that is detached from the secondary school, IFM or IFP). Human resources are the strength of everything that man undertakes. People create value; and no educational success is possible as long as human capital is not put at the center of educational policies. In a country where the lack of qualified teachers has forced us into all joke practices, nothing justifies the waste of human resources whereby teachers who do not hold any classes unwittingly take their salaries and indulge in other lucrative activities: trade of all kinds. , management of orange money points, contract employees at MINUSMA, etc.

However, in a recent report, the African Union and UNICEF drew the attention of African countries to the perverse effects of poor teacher management: “In addition to the problems related to the number of teachers, their qualifications and their training and management also represent an additional . pitfall. Several studies, including sectoral analyses, have shown that in some African countries, the administrative and pedagogical management of teachers suffers from serious deficiencies. Inadequate management can have a negative impact on the behavior of teachers and their managers and consequently on the efficiency and quality of education systems. Management issues include teacher placement, career development, training, professional development (including pedagogical support and supervision), reward and other incentives, and accountability (AU, UNICEF, Transforming Education in Africa). Report says Africa will need 17 million more teachers to achieve universal access to primary and secondary education until 2030.

Headmistress of the Baouro CISSE public high school in Djenné.

At 28, she quits her job to turn into a “stay-at-home girlfriend”

For Gen Z, journey and leisure take priority over work and stability

My lovely Mitchell | the philosophy of journals

What does the emergency plan present for in case of energy outages?

“How am I presupposed to dwell on 100 euros a month?”: These college students in precarious circumstances denounce the scholarship system
1 hour ago