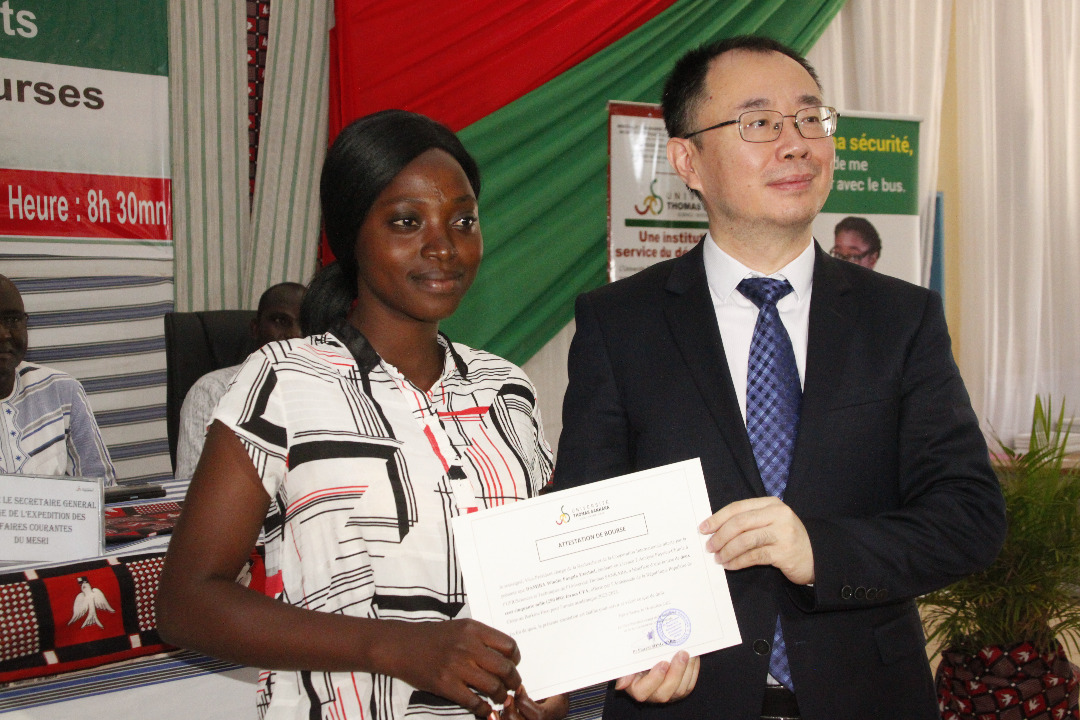 Thomas Sankara University (UTS) organized a welcoming ceremony for its new students on October 18 in its midst. The ceremony was chaired by the Secretary General of the Ministry responsible for Higher Education, represented by Dr. Karifa Bayo, Inspector General for Services, in the presence of partners, in particular the Ambassador of the People’s Republic of China Lu Shan.

According to the director of UTS, Pr Pam Zahonogo, this ceremony is the third of its kind to give new students the necessary information on an academic and social level. It is also an opportunity for the university to promote its partners and reward the best students who have excelled through their work.

On this occasion, the administrative staff, the teaching staff, the partners, the traditional and religious authorities of the University were mobilized to welcome these new students. The ceremony began with the presentation of the University by the Director of Academic Affairs, Orientation and Information (DAOI), Pr. Didier Zoungrana.

He first outlined the university’s ambitions, among other things: to educate top-class economists and lawyers capable of responding to demand for research, higher education and expertise from African countries. Then he clarified that UTS has about 39,000 students and 189 employees.

It consists of three training and research units (SEG, SJP and the Science and Technology UFR), two institutes (IUFIC and IFOAD) and a doctoral school. The director of the university, meanwhile, welcomed the new students. “Despite the difficult national and international context, we have hope because we will try to focus on the resources we have and use them efficiently to provide better services to students”, he promised them

On the occasion of this ceremony, the Embassy of the People’s Republic of China, through its Ambassador Lu Shan, awarded scholarships (FCFA 250,000 / person) to students who have distinguished themselves through their academic achievements. According to the director of UTS, the People’s Republic of China grants the university 5 million FCFA, which is equivalent to 20 scholarships, every year. According to the ambassador, this action is part of the Sino-Burkina cooperation.

“We have many educational projects with the Land of Upright Men. Young people should benefit from this cooperation. That’s why we’ve teamed up with UTS. The Chinese Embassy in Burkina Faso has also established the Chinese Ambassador’s Scholarship at Thomas Sankara University and other Burkinabe universities, and awards scholarships to the top 100 most deserving Burkinabe students each year.

The next step for us will be to mobilize all the necessary resources to support the students so they can thrive. », explained the Chinese diplomat. Immediately, the UTS awarded its partners certificates of appreciation for their assistance in the success of their missions.

Digital Lessons: Know-how should not take over studying

Paris or London? The monetary market sport is relaunched

Increased Schooling: Whereas Ready for the RSU Scholarships for the Wealthy

The Different Lifetime of Pierre Dubail

Othmane Yassine, a younger lawyer and politician on the bedside of immigrants
4 hours ago

Haiti – Schooling: The Ministry and its companions have campaigned for a return to high school
7 hours ago